Use that 4x4 switch on your Path and go get dirty!

Girlfriend & I headed down to this area last weekend. Since I screwed up my foot the week before, we weren't going to do any backpacking. Instead, we did a number of hikes in different parts of the monument. We camped in the north end outside of Boulder. After setting up camp the day we arrived, we drove out on the Burr Trail Road, then left the pavement to drive out to the petrified forest (2nd largest behind the Petrified Forest National Monument in AZ). 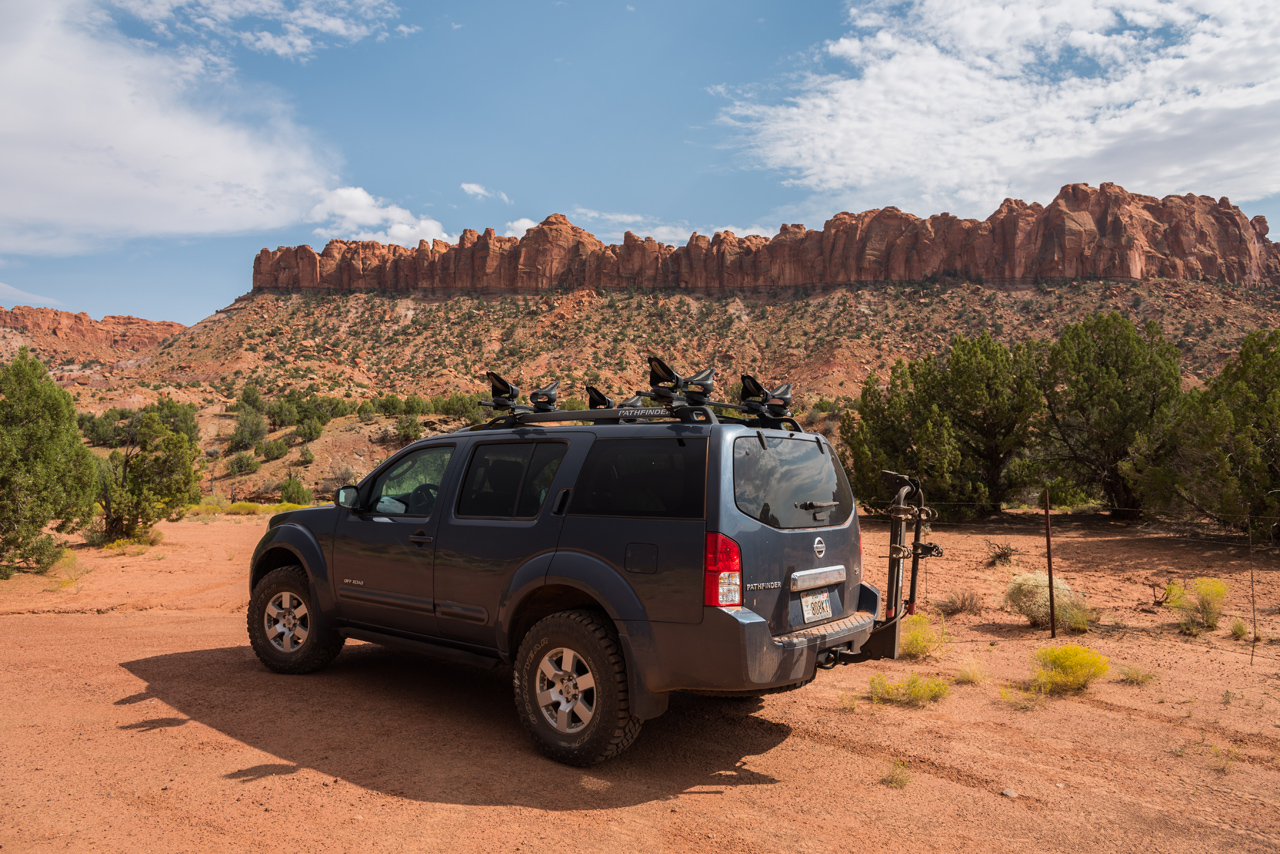 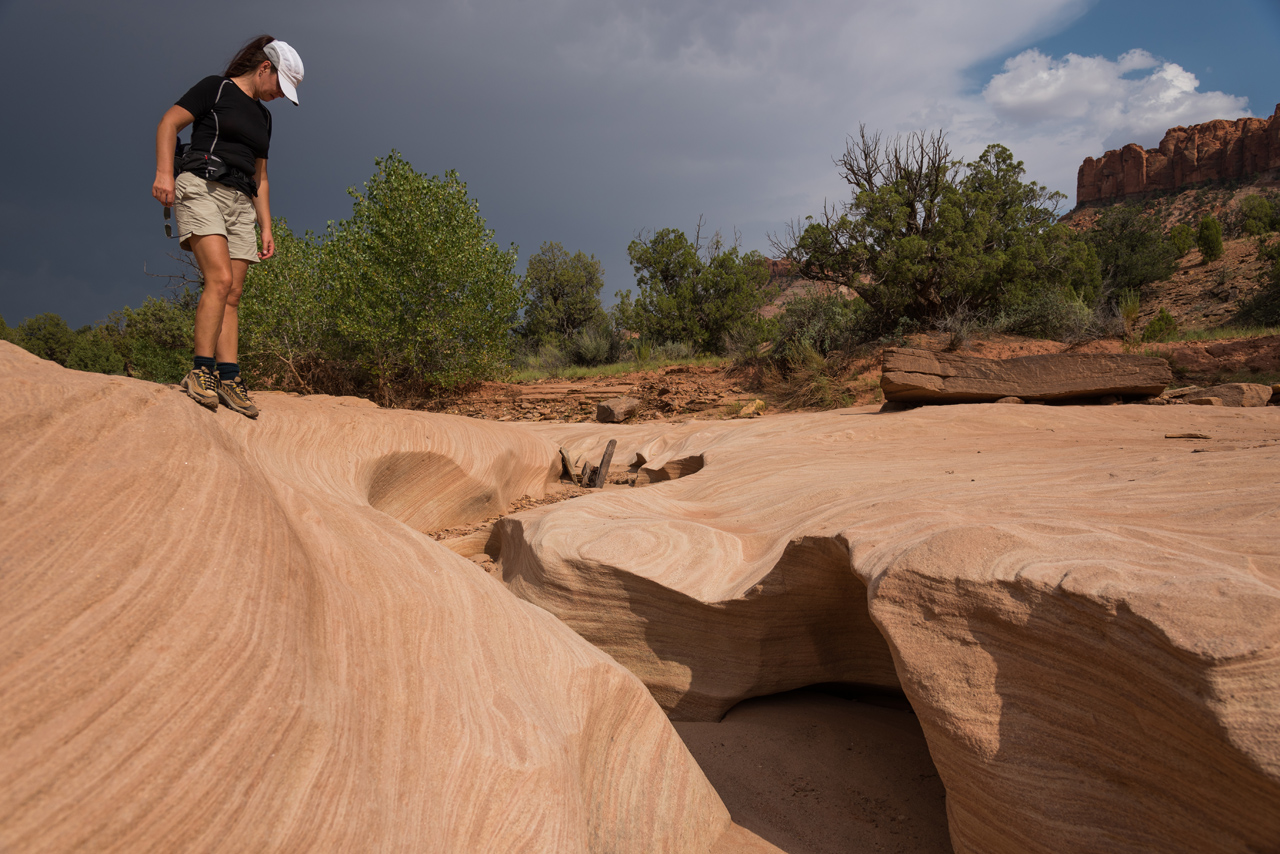 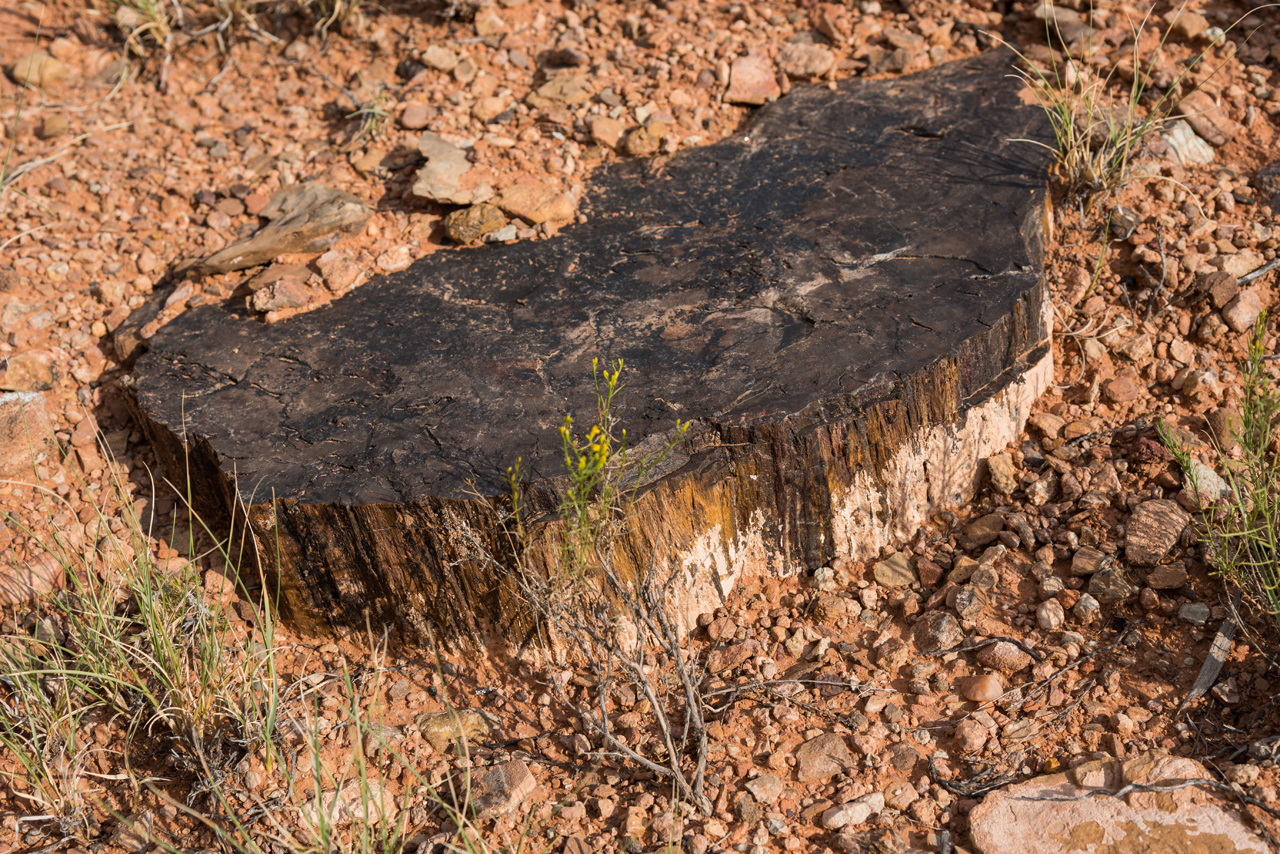 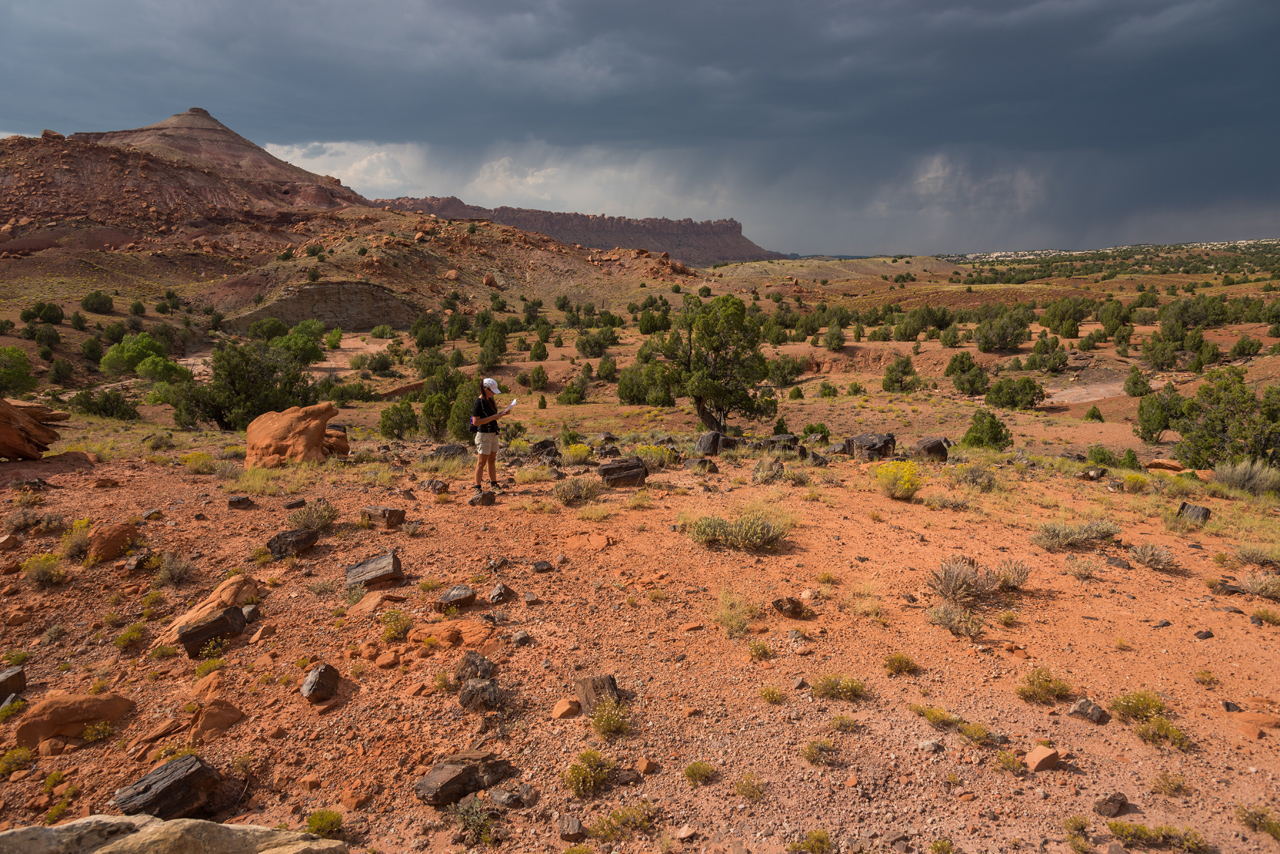 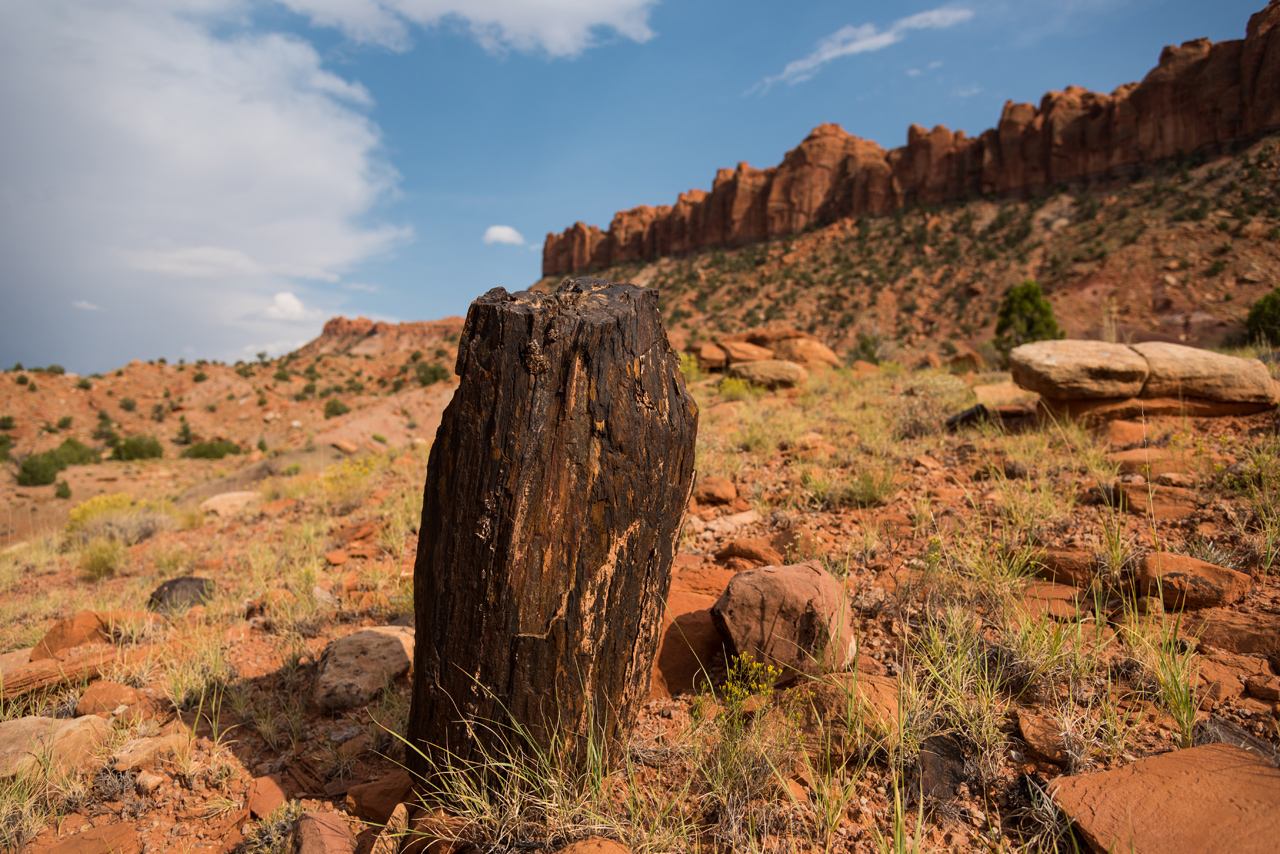 The best part is that we didn't come across any other vehicle or person. Just us. I can't stand taking video, processing it & then knowing it will never be seen again. But, I picked up a sjcam (gopro clone with a realistic price) last year because I thought we'd be heading to the Barrier Reef, but our plans changed (upcoming post). Anyway, I've had a threaded dash mount installed for a couple of years next to my GPS mount in the little dash tray. I did a couple of videos using timelapse. Here's one from our campground to the petrified forest:

Guess I'll have to put a mount near the rear view mirror as the wide angle picks up too much of the dash.

The next morning, we drove down to Escalante, then the Hole in the Rock Road to get to the parking area for the Zebra Slot. The hike down to the start of the slot is through a pretty scenic sandstone canyon: 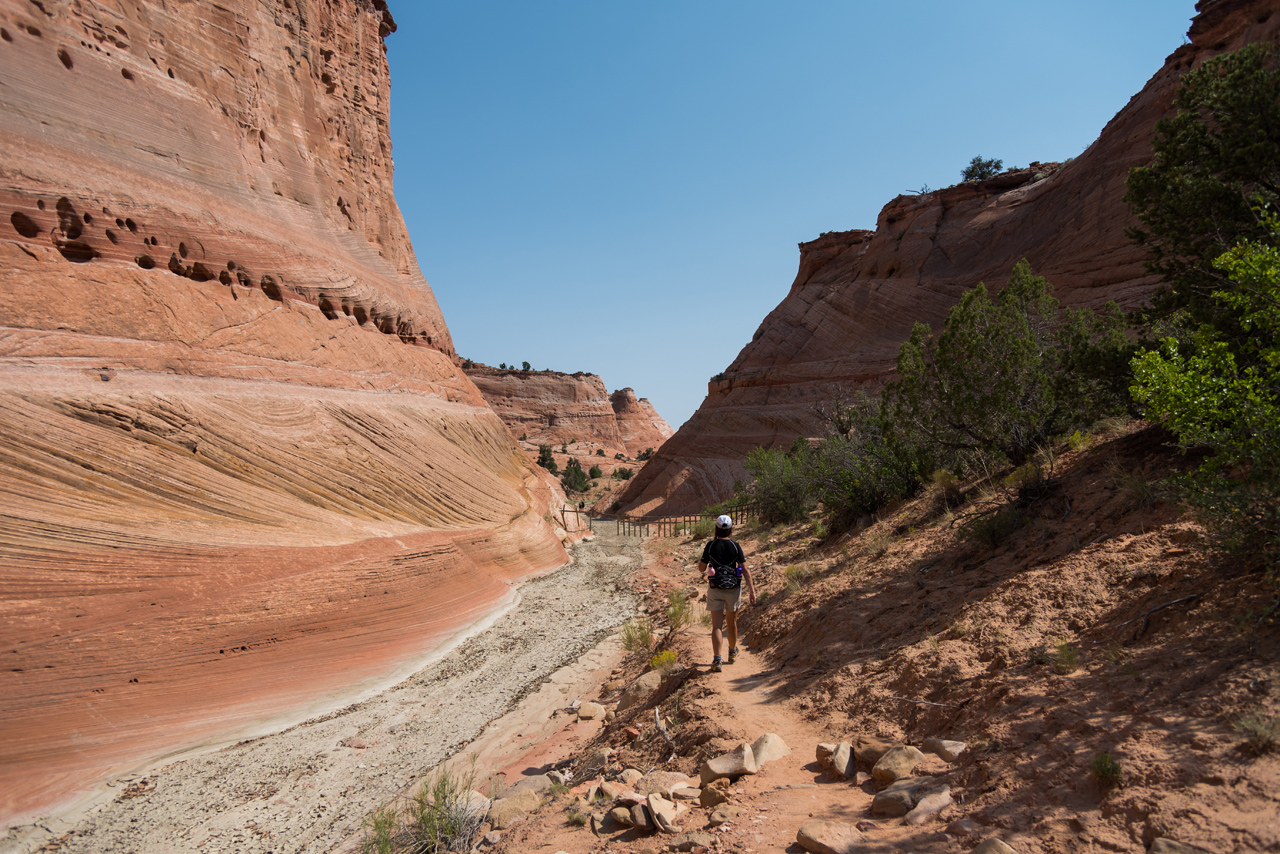 Zebra Slot is pretty narrow in spots, but very scenic. We tried getting all the way through it, but we would have needed a bit of climbing gear to do so safely. We went barefoot through some fairly deep water which was actually very refreshing after all the heat on the way in. 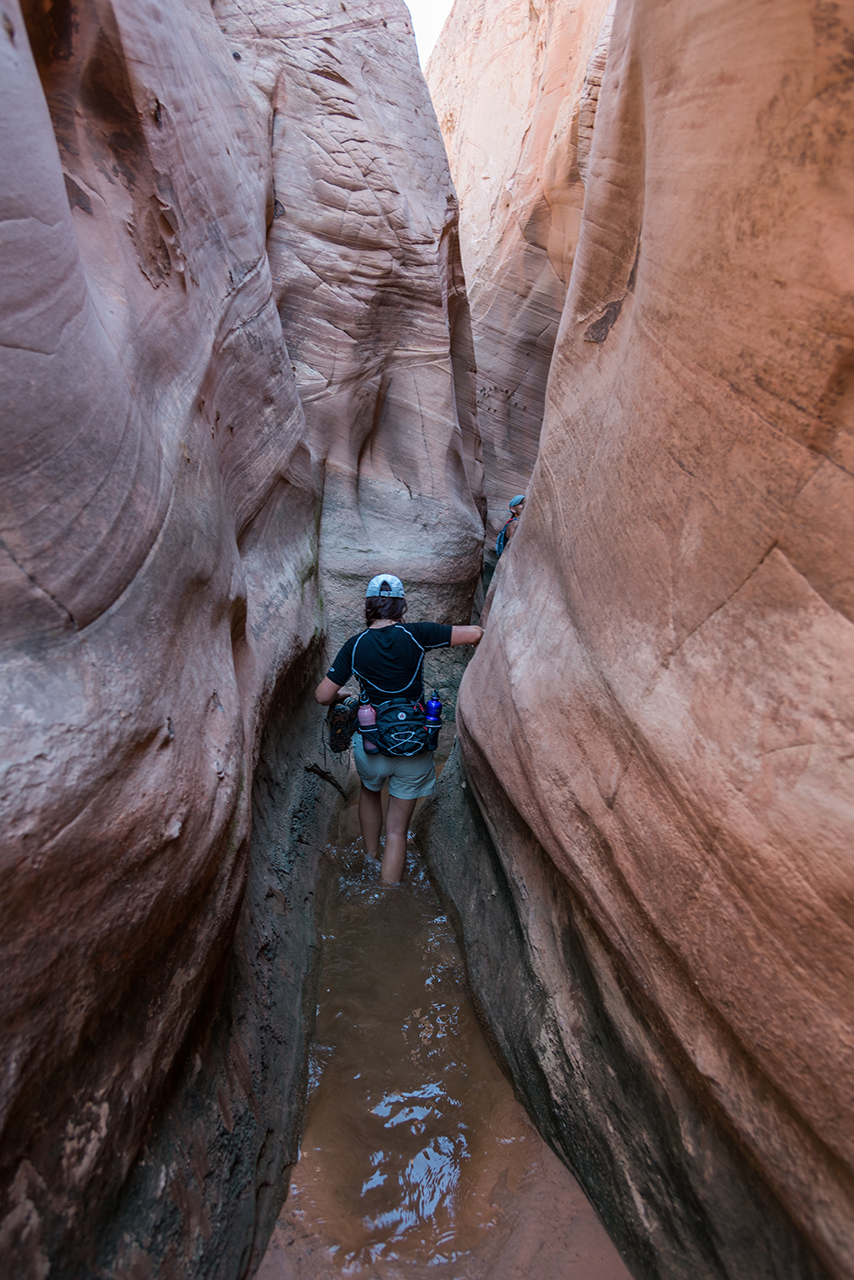 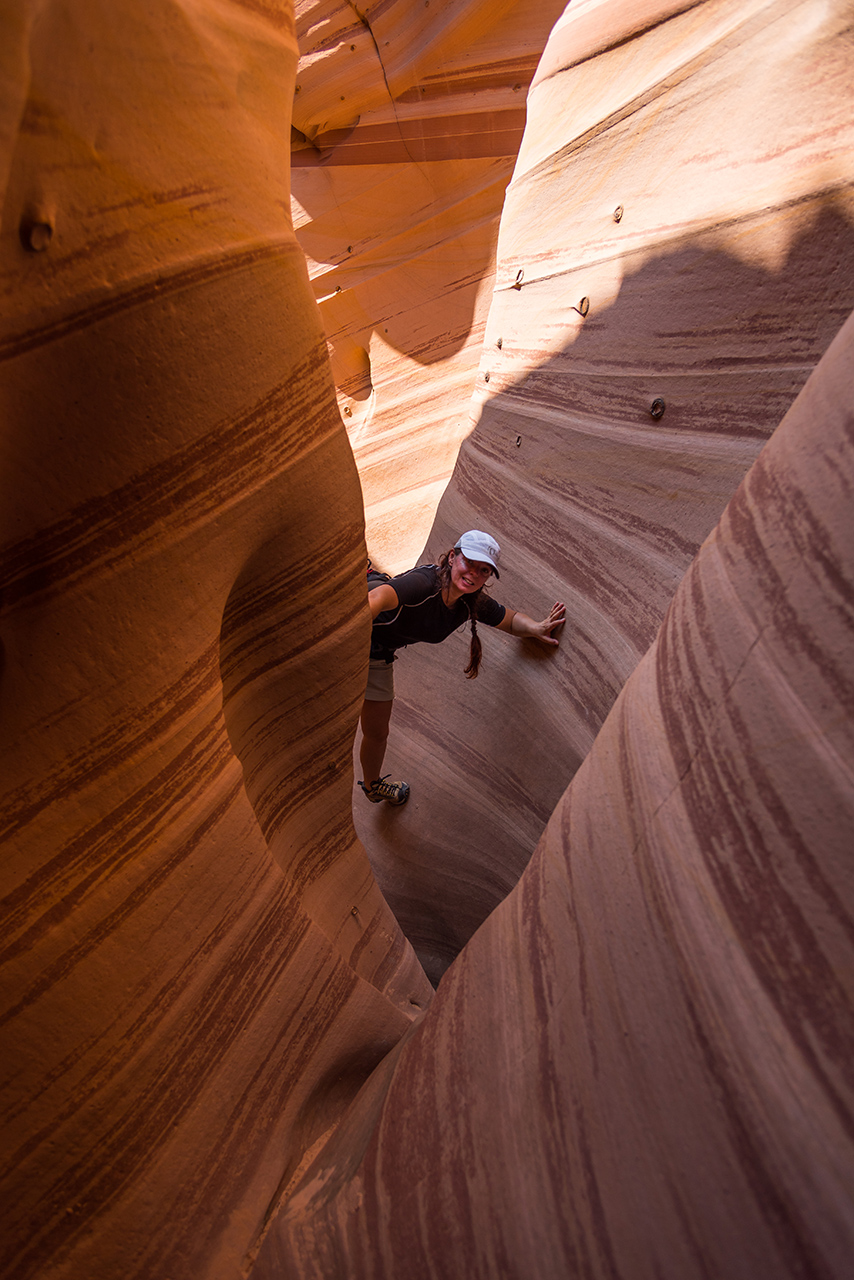 The small portion of the slot that gave it its name: 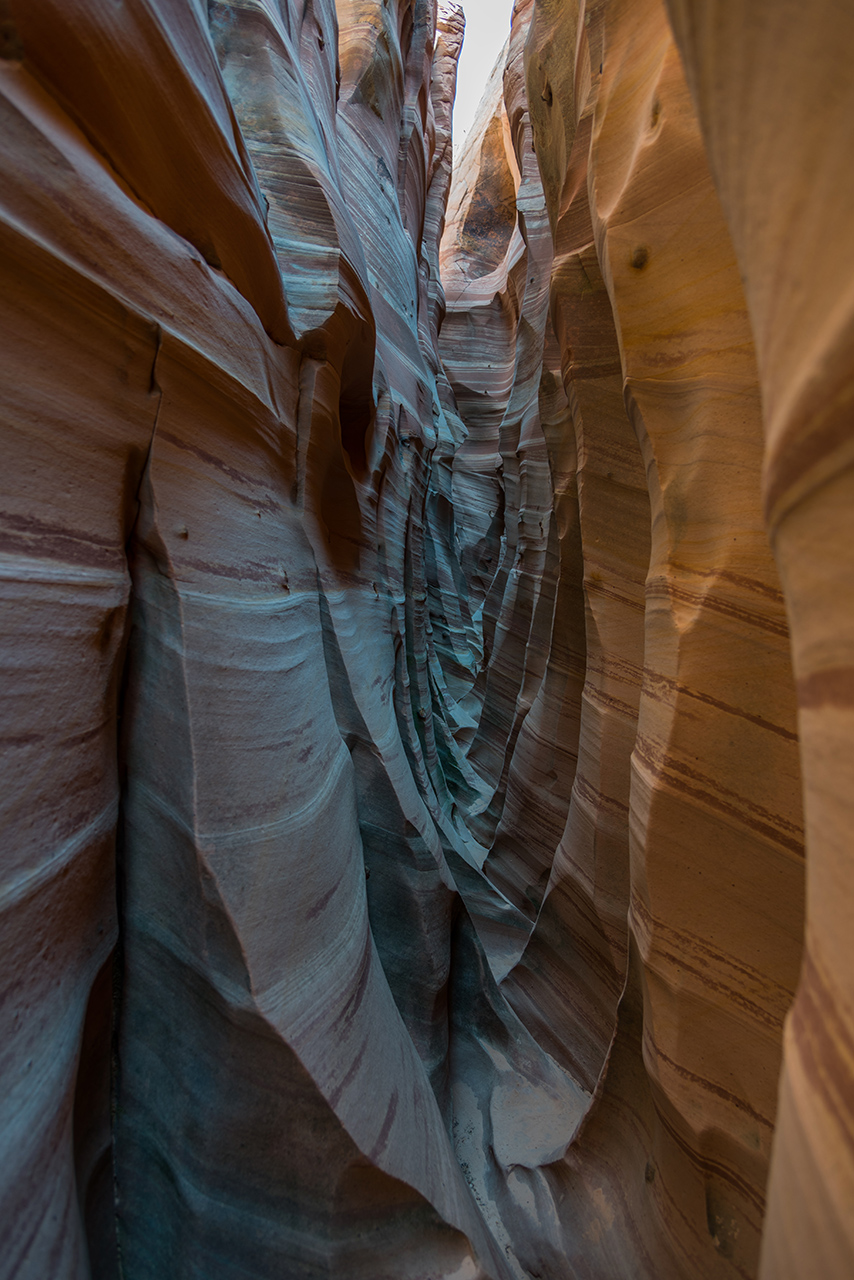 Hiked back to the Pathfinder & drove down to Devil's Garden: 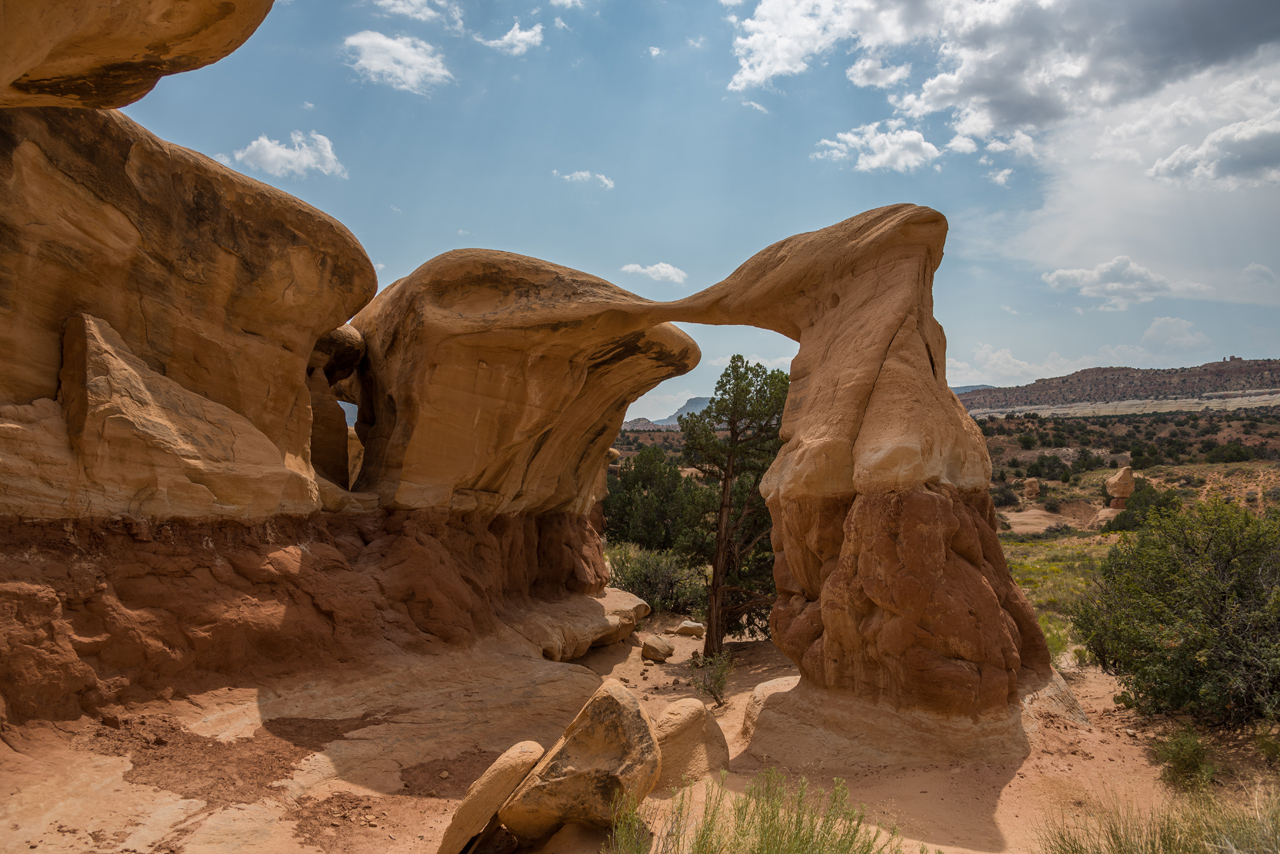 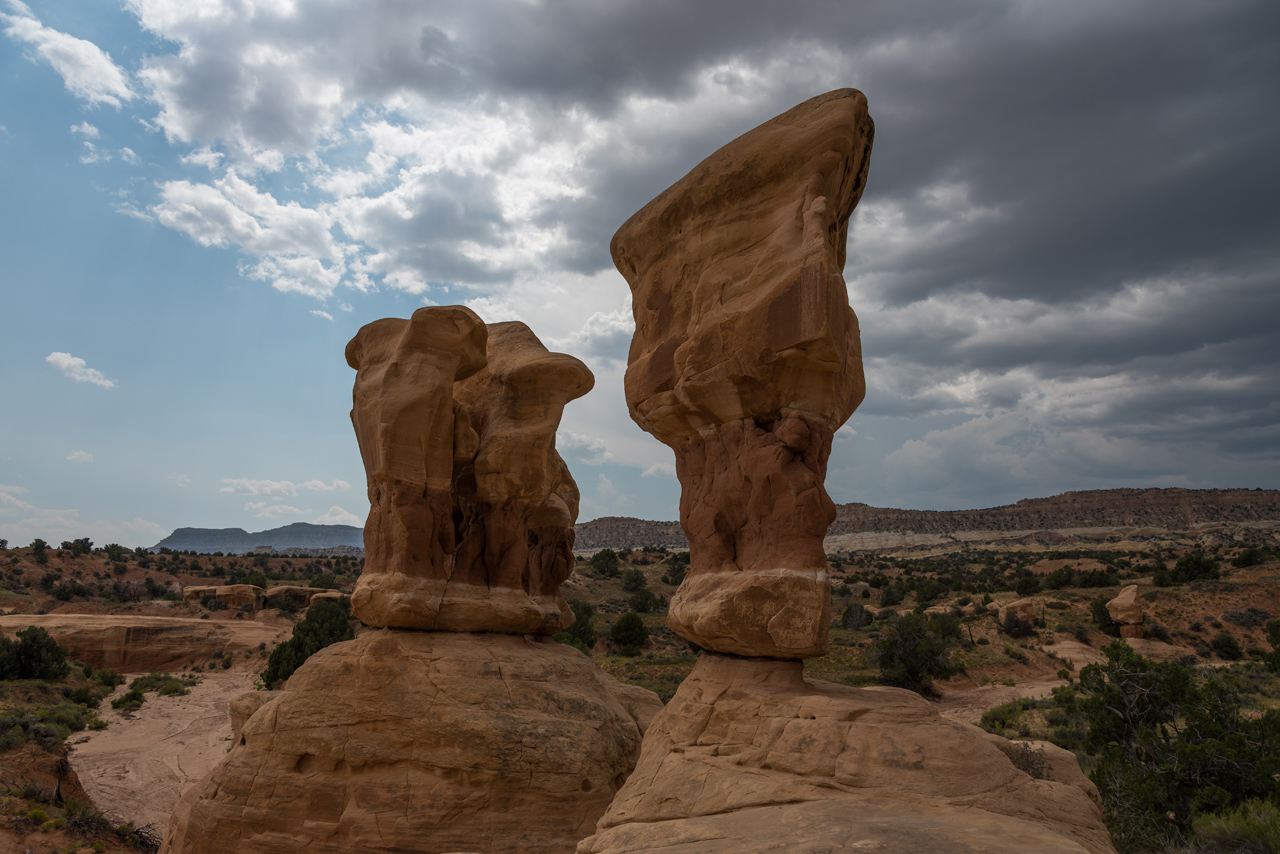 In the picture above, you can see some dark clouds coming in from the right. That was actually a fairly powerful storm cell that followed us down to our last stop at an area full of over 800 dinosaur tracks. Not more than 30 seconds or so after parking and starting our hike up to the tracks, it started hailing, so we went back to the Path to wait it out. The hail was followed by intense rain. The downpour lasted about 30 minutes. The short (1.5 miles or so) 4x4 road to the tracks was just mangled. Part of it had a rushing torrent flowing through it about 1.5 feet deep and a foot or so wide. And wet sand, which is eroded from sandstone millions of years old, is comparable to concrete. It caked the Duratracs perfectly-made it look like I had completely smooth orange tires. Lots & lots of water covering the road in patches, some for 100 feet or so, although none were more than a foot deep. No problem driving through it since the water cleared off the sand from the tires & I had traction. This 4x4 trail goes from one side of a small valley to the other, crossing a large dry wash on the way. Well, about 25 feet away from this now raging torrent of water, half the road was just gone. Like missing 2 feet of solid ground on one side. With the tires completely caked again, the road tilted madly because of the missing ground, the Pathfinder slid alarmingly sideways a few times. Neither one of us even thought about taking pictures or video of any of this-we were fully concentrating on making it out of there. 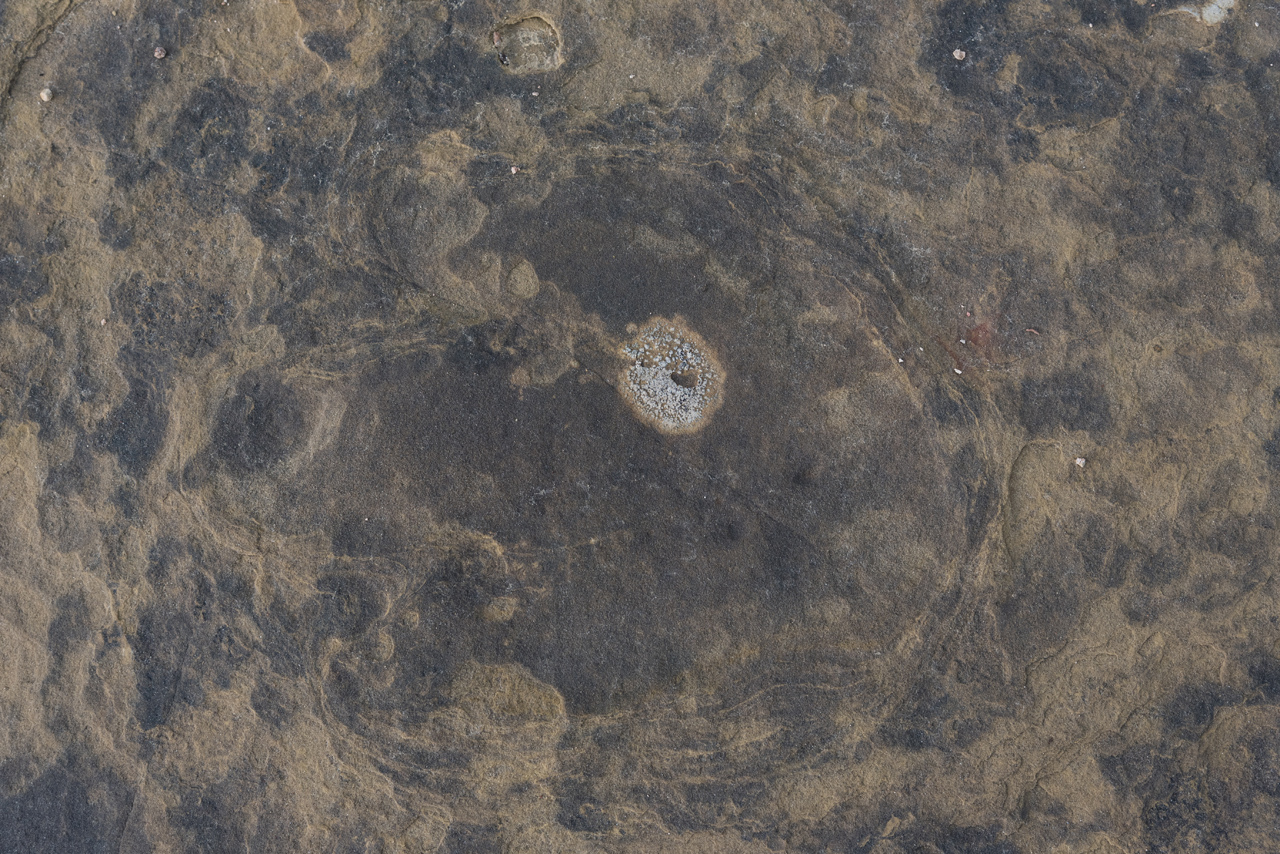 Anyway, after making it through the worst roads I have ever driven, we made it out to the main road, Hole in the Rock Road. We made it a few miles before we had to stop behind a line of vehicles which were all stopped. Got out & saw that the road had been washed away. One of the vehicles was a ranger, and he radioed in and was told that we could all camp with our vehicles or hike out. There were about 11 vehicles in total. Fortunately, there were also 5 or 6 kids as well. Because of them, it turned into a search and rescue operation. 4 Sheriff vehicles showed up with a big front loader. They were able to dig out the road enough to make it safe enough to drive, but only for 4x4s. The first in line, a Wrangler, put a little too much gas into his run. You could see him hit a few large rocks which bounced his ass pretty high. He barely managed to get through. The next was a Ford something. Basically a CUV that has 4x4. He got stuck in 3 feet of water & the front loader had to pull him out. The guy had some major front end damage to the grill and every plastic piece on the front of his car which I helped him to zip tie in place so he could drive away. Surprisingly, the Pathfinder just walked right through with no problem. The vehicles that were not 4x4 had to stay, and since it was already Saturday night, that meant nothing would be done with the road until Monday (Sunday is all about church in Utah). While I had plenty of food and water, my blanket was back in the campground & all I had was an emergency bivy sack. Lesson learned: from now on I will bring a spare tent.

This looks a bit misleading in terms of scale. The road is actually a bit wider than a 2 lane. The water was also about 5 feet higher than this at its peak. 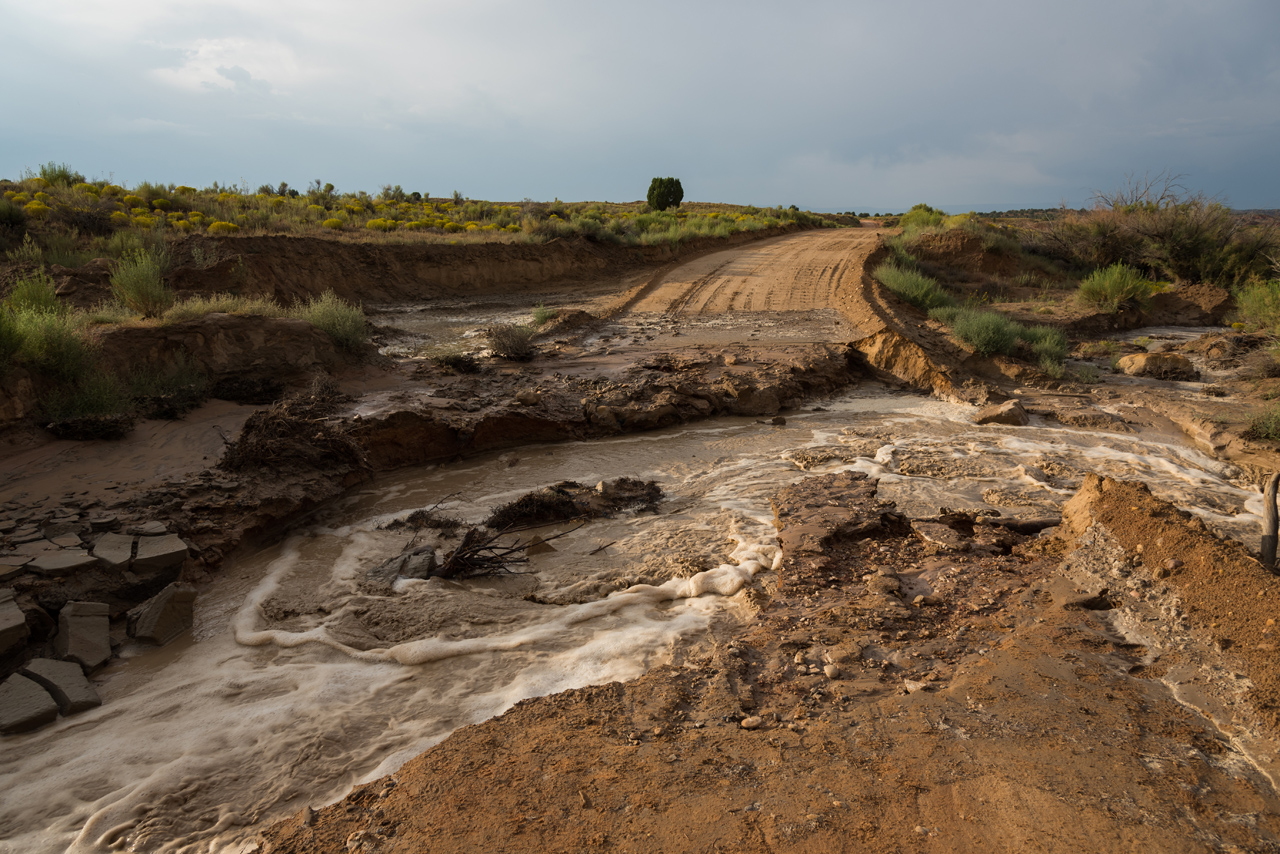 And guess what the first search & rescue guy was driving: 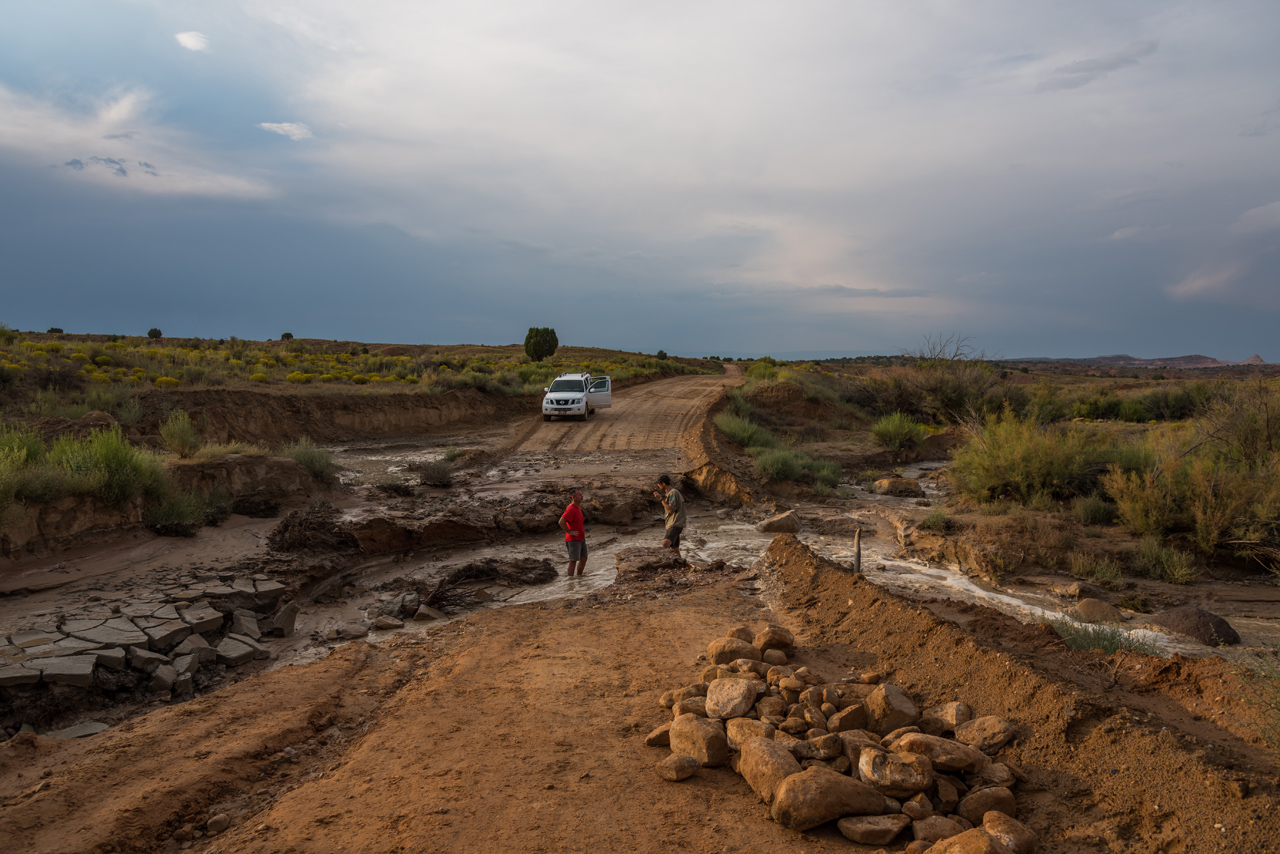 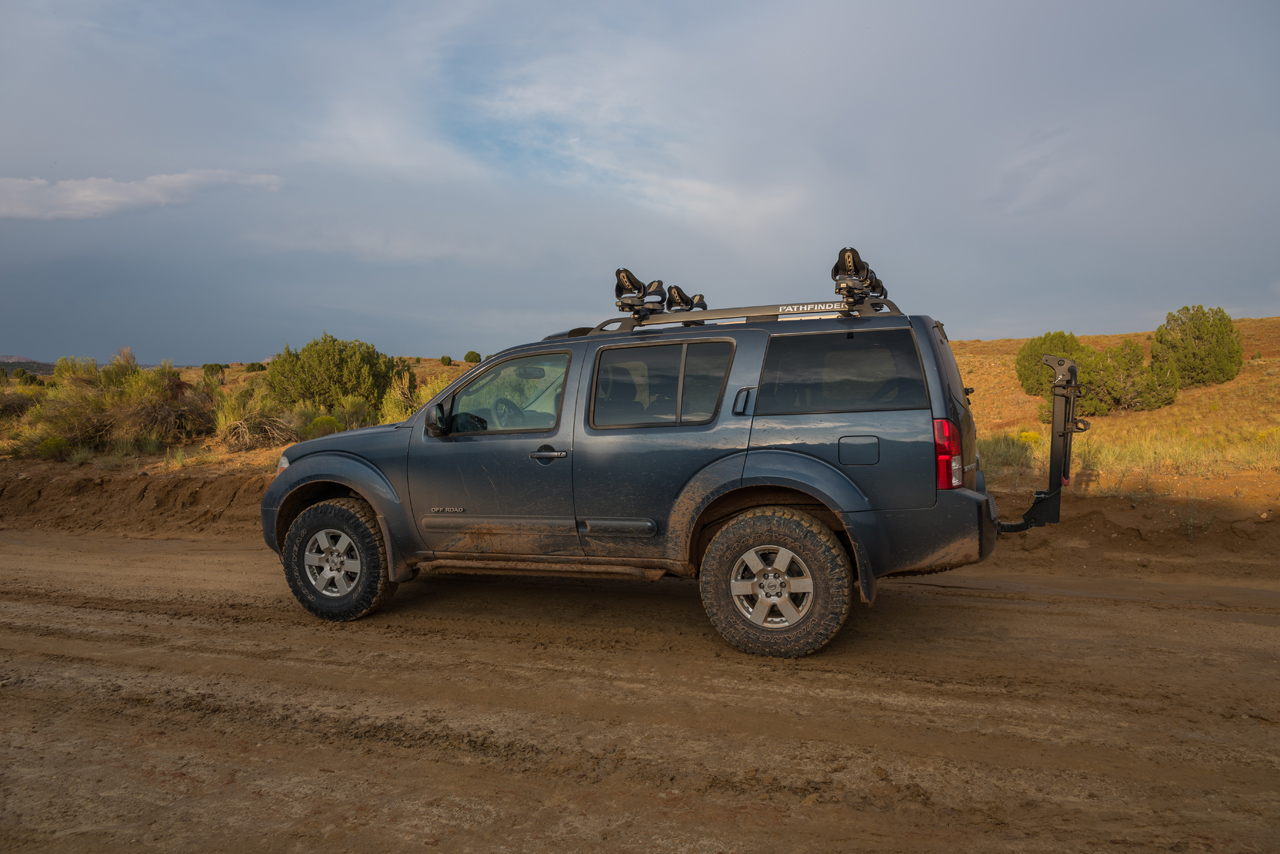 We made it back to Escalante about 9:30pm. Worst part was that the pizza place was closed already, so we had some frozen burritos from the gas station before we headed to camp. Good times.

Nothing worse than almost getting marooned and having to settle for frozen burritos. Rough, man

Great pictures! Looks like a good time. Despite (or because) the events.
Top

Wow what a beautiful area!
Looks like you guys had a great time AND got out safe!